On the “Demotion” of Pluto 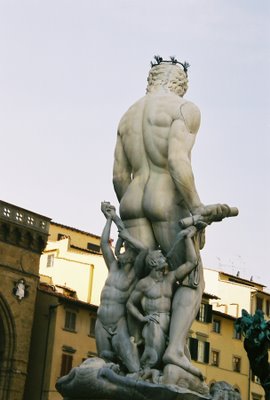 The “demotion” of Pluto from a planet to a “dwarf planet” by the International Astronomical Union has caused a surprisingly emotional reaction from the general public, including the California State Legislature. Some people feel as though a member of the family is being kicked out. While in Italy, I saw the statue of Neptune in the leftmost photograph above. I asked him what he thought about his planet being officially outermost due to Pluto’s reclassification; he had no comment.

I think the reasons for reclassifying Pluto are scientifically sound, but I am not a planetary astronomer. Defining categories like this is usually difficult because God is not obliged to arrange nature in neat compartments. None of the objects orbiting our sun have the label “planet” written on them, so we must make the best choices we can about how to label them.

Let me suggest a new way to emotionally interpret the decision of the IAU. In 1930, the family of eight planets found an orphan wandering in the outer reaches of the known solar system. We adopted him, called him our ninth planet, and named him Pluto, but he always seemed different and out of place. Around the end of the 20th century, many more objects like Pluto were discovered in the same region of space. We began to realize that Pluto was more like these than like the other eight planets.

On August 24, 2006, the IAU decided that after 76 years, we had found Pluto’s original family. The designation of Pluto as a “dwarf planet” does not mean we have kicked out a member of the family. We have merely reunited an adopted child with his true family.

This may all be excessively sentimental and anthropomorphic, but I think the analogy still works.

1 Response to On the “Demotion” of Pluto