A time machine built into a DeLorean? No. A nuclear bomb? Well, once upon a time, but not today. Much griping about how this experiment costs less than one month of the war in Iraq? Well, yes…but that’s not really the point.

Alright, I’ll just give you the answer: The Large Hadron Collider. I have been pleasantly surprised by the amount of coverage the LHC has been receiving in the popular media, even though much of it is due to disproven fears of stable black holes (HT) or the recent magnet failure.

Most impressively, the beam tests conducted on Sept. 10 were the lead story on the BBC News homepage. 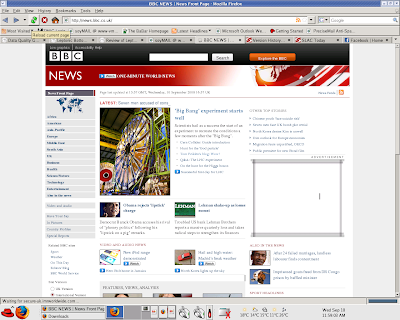 More locally, the Dispatch has covered Ohio State’s work at the LHC in several articles, including a feature in the weekly science section (Sept. 23, B4). The subject of this entry is part of the headline from that feature. It gives a fairly accurate, if somewhat colloquial, summary of the collider’s goals:

“Scientists want to blast down to the most fundamental forms of matter and find the set of rules that everything in the universe — down to subatomic particles — lives by.”

One of the greatest blessings of my life is that I can cite that sentence as my job description.

An article from Sept. 11 (p. A3) discusses more specifically what scientists hope to find in the aftermath of the collisions of protons or lead nuclei at the LHC.

From the fireballs, there might spring forth black holes and the elusive thing that gives matter its mass. Or not! There might be particles called “strangelets” and evidence of “dark matter” and signs of “supersymmetry,” and maybe a little antimatter.

Oh, and they might find some extra dimensions. But this is the delicious part. They don’t exactly know.

That is the most delicious part, and that is the thrill of exploration. We do not know what we will find, but we know that we will be the first humans to find it.